Last Friday we had another of our open days for potential applicants to our VFX, animation and game degree programmes. It was a busy day, and this time we had our Oculus Rift and a workstation set up so people could try that out and play with some of the software they’ll be using if they come on our programmes. 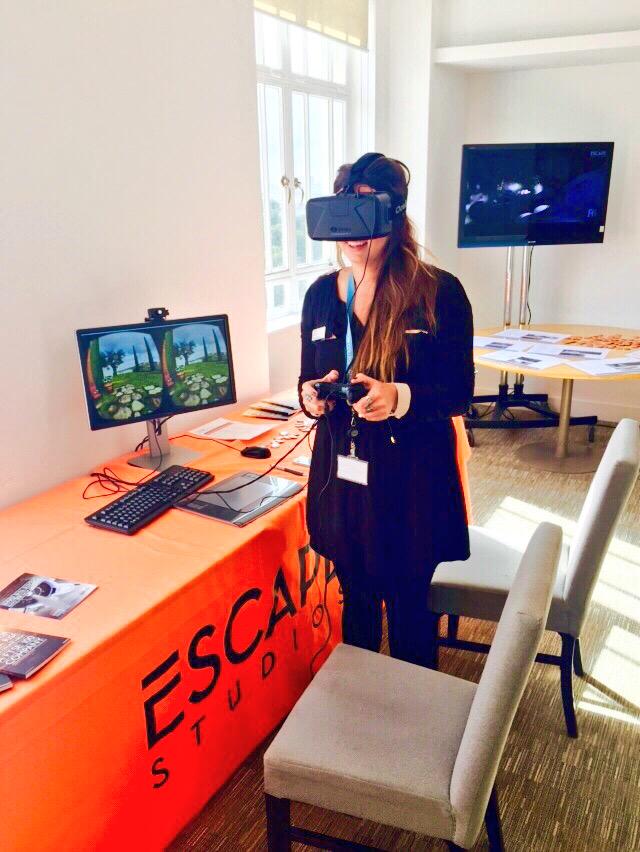 It’s always good to speak to people who are starting out on the road to a career in the creative industries, and the enthusiasm and depth to which they’ve started developing their skills already is amazing. I wish I’d been that focussed at that age!

Having our new head of animation along, Alex Williams, was great too, especially for those specifically interested in the animation degree. I become a proper fan-boy when he says things like “when I worked on the Lion King..”, working alongside Alex and the rest of the tutors at Escape Studios is a real treat and they bring so much to the courses. I wonder if I should get him to autograph my DVD of Iron Giant (or even better the new Blu Ray when it arrives, it’s one of my fave films), or would that be unprofessional!?

Follow Alex’s blog for interesting tips, especially what to do for your portfolio. And if the games are more your thing, follow our games blog from Simon Fenton.

If you couldn’t make it along to the open day, there’s details of future ones on the website, so come along and find out more, including details of our ‘Experience Day’ which gives a real flavour of how we work with students. Whatever you decide, talking about the games, animation and VFX with like-minded people is always fun.

It’s been a while since I’ve been to SIGGRAPH, so it was great to get back to it last month. As ever the sheer scale of it is somewhat overwhelming, and certainly means that even with a trio of eager Escapees, we were never going to get to everything that we wanted to.

Arriving slightly jet-lagged on Sunday afternoon, it was straight off to the convention centre to register and attend the first session: the technical papers fast forward.

For those of you who haven’t been to this, this is where the authors of the 154 (how many!?) technical papers have that chance to ‘sell’ their papers in 30 seconds. This is great fun, both to see how they do this and to see the variety of styles, from very dry statements of their paper’s contribution through to hip-hop backed, costumed performances. What struck me from this was the sheer diversity of the papers, but also that a lot seems to be very incremental and there didn’t seem to be many ‘eureka’ breakthroughs this year. I may of course be very wrong…time will tell.

So if the technical stream was worthy but uninspiring, what were the highlights?

Has anyone avoided the VR hype in the last year or so? Well done if you have. There was definitely a theme here, both in terms of ‘look at me’ type shouting and ‘what should we do with this?’ discussions. It was great to hear from those working at the forefront (The Mill, xRez, New Deal) in an insightful session on the trials and tribulations of putting together a mix of video and CG in an engaging experience

This was interesting to contrast with the panel with those who were at the last VR ‘Renaissance’ (sharing memories of the queues for the CAVE at SIGGRAPH92). Whilst as many people pointed out, VR has never gone away, it’s just not been in the public eye for the last 20 years, there was a general feeling that it would find its place in the mainstream now due to a mix of major investment, step changes in visual fidelity and the low entry price point for consumers. We shall see, but certainly the demo from ILM’s Xlab looked mighty fine. Or am I just excited by the forthcoming Star Wars film?

Talking of ILM…my next ‘highlight’ (OK, highlights as it was split over two sessions) was the ILM presentations.

To hear how it all began 40 years ago and where they are today, and to see stills from productions spanning that time was fascinating. To hear Dennis Muren saying that he read the CG ‘bible’ Foley & Van Dam when he was trying to get to grips with CG was a nice touch as that was my first graphics text book that I was sent by my supervisor to read as preparation for my doctorate. Am I too much of a geek if I say I’ve a signed copy?!

Seeing the stills from the very beginning brought home how well these stand up against modern effects today, and the continued use of miniatures alongside CG in modern productions such as Interstellar and of course the forthcoming Episode 7 really make it all seem so much more real on the screen. And hearing that somewhere there are 70mm prints of the Empire Strikes Back with some temporary FX shots instead of the finished renders is amazing, has anyone checked ebay lately?

What I hadn’t realised was how much mo-cap was used for the dinosaurs in Jurrasic World. It makes sense for the ‘raptors, with their size and interaction with the human actors making them seem more suited to being driven by a mo-cap performance. But for the t-rex and inodminus rex? I wouldn’t have guessed. The auditions that they had to see how well people could ‘walk like a dinosaur’ (was I the only one thinking “boom boom acka lacka lacka boom” in my head?) were quite amusing, but I have to say the final performances were pretty convincing, albeit with some hilarious ‘out takes’ when they took a break but the capture rolled on…

Is there any more we can hear about the wonderful effects in Interstellar? Yep. It was great to see Oliver James, Kip Thorne, Paul Franklin and Eugènie von Tunzelmann on stage together. Hearing about the lengths that they went to for a realistic rendering of the black hole was fascinating again, although I’d had the pleasure of catching some of the detail from James at Beergraph in London earlier this year. What caught my attention this time was the discussion of the tesseract: just how do you visualise 4D and 5D in our boring old 3D world, and then project it on a 2D screen? I’ve been fascinated with hypercubes since I was at school, but maybe not to the level of von Tunzelmann whose obsession runs to writing hypercube renderers for fun and having a tattoo of a hypercube on her arm. I guess that’s the dedication it takes to work on an Oscar winning film…

All the tech. All the shiny new toys, software and kit. And my favourite thing of all this year was a load of cardboard boxes. That’s not entirely fair of course. It was actually some cardboard plus a load of tech. Basically it was a live ‘make your own’ video game but with added physical cut-and-paste with the wonderful State of Play. I loved Lume and Lumino City, and bringing that aesthetic to a live workshop was a great idea. I can’t wait to see what they do next!